Through analyzing design scenarios informed by the topics explored in the Spaces of Solidarity curriculum, this study aims to gain an understanding of how different strategies may be employed to enable/engage communities, encourage investment in open space, and cultivate a renewed stewardship between people and land.

Open spaces serve as a valuable spatial platform for building solidarity. In the United States, Washington Square Park in New York City and the Boston Commons are notable examples of public spaces that typically serve as passive recreational zones but are quick to be activated as centers for civic protest in times of crisis. The fundamental democratic right to gather is manifested in public parks to form an essential component of the urban condition. Despite the critical role open spaces play, they face challenges to their ability to function practically when cultural disinterest manifests into fiduciary disinvestment and active resistance to investment. Franklin Park is not unique in this sense. As the largest public park in Boston at approximately 527 acres in size, it is a park that has undergone various cycles of use and neglect through the decades. Like other large parks of its stature, Franklin Park borders multiple neighborhoods with diverse demographic composition and relies heavily on community members to steward the land[1]. These three neighborhoods are Jamaica Plain, Roxbury, and Dorchester.

Franklin Park was designed by Frederick Law Olmsted in 1800s as part of the Emerald Necklace parkway system. While it was intended to be the magnum opus of his work, it never reached the popularity as Olmsted’s other designs such as Prospect Park and Central Park in New York City. Today, the park hosts a series of important communal events such as the annual Juneteenth celebration, various cultural festivals, and programming such as the Kite and Bike festival. Despite maintaining a valuable cultural role in the community, peace in the park is threatened by forces of gentrification, resulting in tensions between its users. One resident described her frustration as follows:

“When you go to the community meetings and those people are present some of what is talked about is not ‘how do we share the space?’ but how do we make the space serve our own needs and desires?’ — more cafes, a dog park, more greenery. They’re putting those things as a priority where folks of color are not. It’s not ‘like it or not we’re going to be neighbors, and what do we want to see from our community,’ not just a particularperspective. They’re seen as culturally tone deaf, just dismissing what existed and negating that and trying to white wash the area.” [2]

Other residents express their frustration as their contributions to the community over the decades are continually undermined by new residents co-opting initiatives to improve living conditions. Many long-time residents fear that social capital they’ve developed is being threatened by new residents entering the space.

The solution to Franklin Park’s struggle to serve popularly as an open space and garner investment could be addressed through relieving tensions between user groups. By generating open space for solidarity to the adjacent communities outside of crisis, the park would act as a point of cohesion to surrounding residents. Critical to the redesign of Franklin Park is protecting the social capital of longtime residents. A prominent goal of any design intervention would be to utilize social capital as the basis to cultivating cultural and economic capital is feasible.[3]The question remains: How can solidarity be generated, and social capital be protected through design? Place-based solidarity maintains four sources: interdependence, shared norms and values, struggle, and encounter, while promoting including diversity[4]. Through utilizing a combination of these four sources, three methodologies (or proposed design interventions) are explored to examine possibilities of creating solidarity and understand how design may be implemented to either create or protect social capital in a space.

This intervention seeks to activate the urban edge that neighbors Roxbury. Of the three neighborhoods surrounding Franklin Park, Roxbury residents hold the lowest median household income and the largest rates of unemployment. In addition to lower financial earnings, the Roxbury neighborhood has one of the highest rates of households for single mothers and a large population of youths under the age of 18.[5]Along the edge of Roxbury and Franklin Park, a series of pathways extend the urban streets within the park to various destination points that begin to intermingle. Among the proposed programming are daycare centers to serve single mothers and education facilities to support afterschool programs for youth. Recreational fields are scattered along the edge to encourage play and exercise. Small lots of community gardens are also proposed to empower community members to cultivate their own ingredients for sustenance and encourage food security. The programming, while targeted to a specific neighborhood, would be open and available to all surrounding communities. That is, the recreation fields located at the center of the Roxbury and Franklin Park interface would also serve Jamaica Plain and Dorchester residents. The public nature of the park is intended to inspire intermingling an introduce ways of co-mingling with strangers.

The intention of this intervention is to directly addresses social inequity by providing amenities and programming that targets the community with the least economic means. It appeals to the larger struggle within the community to acquire necessary resources and support to prosper; while providing a space for solidarity to the Roxbury community, the design also encourages other communities to gather within the space and encounter one another. Social capital is bolstered by the intermingling of individuals from across neighborhoods.

Through community gardens, solidarity may be generated by effectively creating a commons. This intervention proposes allotment gardens at multiple scales to be owned and operated by various community groups along the interior spine of Franklin Park. Solidarity could potentially manifest by creating a system of shared norms and values in which residents from all communities share one space with a common goal of cultivating and educating one another on food-growing practices. Communities are encouraged to engage with one another with the possibility for strangers to become better acquainted, fostering a newer and stronger sense of community in neighborhood. The management of such an organization would require regulations to stipulate how wealth is shared, equal access to means of reproduction is maintained, and egalitarian decision-making is conducted.[6]While security and camaraderie are encouraged, freedom is arguably challenged since the plurality of spatial use is diminished. Freedom to use public, open space as one desires and security of feeling at ease with one’s neighbors are in constant balance.[7]Still, a commitment to creating a collective commons, one that promotes a common interest is worth exploring. Through co-presence and collaboration, more community members across neighborhoods have the potential of becoming individuals beyond strangers to one another. [8]Social capital is generated as participants have an equal and vested interest in bettering their environment.

Celebrating community contributions through memorialization is another possible methodology for potentializing solidarity. This intervention seeks to integrate Franklin Park with the urban fabric by connecting the journey through the park to the Roxbury Memory Trail, an existing community initiative that proposes a curated trail map with various historical sites throughout Roxbury. This 2-mile long trail celebrates the diverse past and present histories of this part of the city, emphasizing the 20th century African American presence.[9] While the existing trail stops at Franklin Park, the intervention proposes to continue the trail within and to create a loop. Similar to the previously proposed intervention calling for direct programming, the extended Roxbury Memory Trail would specifically address the Roxbury community. While the design itself focuses on one targeting neighborhood, individuals across all neighborhoods would be encouraged to utilize the space. The design seeks to uplift and celebrate a community that feels its contributions to the area have been largely ignored. Thus, maintaining and memorializing the social capital of longtime residents through highlighting the successes of the under-recognized.

Open spaces such as Franklin Park continue to be neglected as a valued community resource in which social cohesion may be fostered. The result of undervaluing open space is poorly maintained facilities and underused urban infrastructure. The proposed design interventions at Franklin Park would not solve ongoing issues of displacement and economic struggle within the surrounding regions but could aid in relieving tensions between neighboring communities. By creating an environment where people are able to shape urban life and have a vested interest in parkland is a step towards bettering living conditions for all. The future of Franklin Park is uncertain, but its potential to become simultaneously a renowned Olmsted urban park and space for solidarity is undeniable. 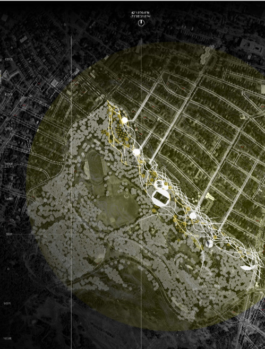 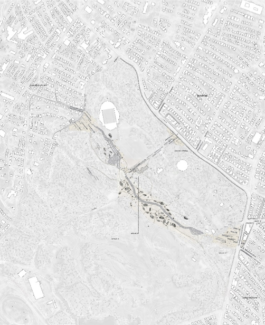 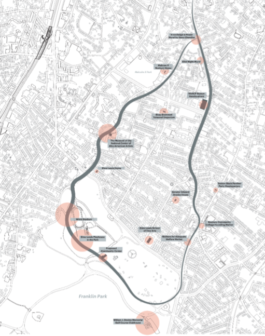 [6]Caffentzis, George, and Silvia Federici. 2014. "Commons Against and Beyond Capitalism." Community Development Journal 92-105.

[7]2001. "An Overture, or Welcome to Elusive Community." In Community: seeking safety in an insecure world, by Zygmunt Bauman, 1-6. Cambridge: Polity Press.

Connie hails from the D.C. / Maryland / Virginia Metropolitan area where she was born and raised. As an undergraduate student at the University of Virginia, she pursued Civil Engineering with interest in exploring the possibilities of applied sciences in the built environment. Following a three-year stint as an engineering consultant in New York City and moonlighting as a Brooklynite, she developed an appreciation for thoughtful design in the context of shared urban experiences. Her curiosities surrounding the importance of design to co-habitation brought her to the GSD where she is currently a student in the Master of Landscape Architecture program. At the GSD, she hopes to explore scales of intervention while remaining grounded in a desire to serve the broader public. In her spare time, Connie enjoys bouldering and continues to cultivate a deep appreciation for music.